The idea of using photography to reflect the passage of a year may not be an original idea – 2014 in photographs is, nonetheless, my way to present a set of ‘markers’ from a purely personal perspective. Each image represents a bit of a struggle – though not an onerous one. Simply an effort to be faithful in representing what I see. “Ah!” you might say 🙂 “What does “Faithful” mean in this context? Well, the answer is simple and complex all at the same time.

The ‘simple’ answer is I always strive to portray an accurate representation of a place or a thing from an image. The complex bit? To imbue a sense of the spirit of the scene. The latter is, or course highly subjective.

Regardless of all, here it is.. I recall pressing the shutter release for all of them – The scene touched me for different reasons and now I would love to know what, if any, emotions these may evoke in you. 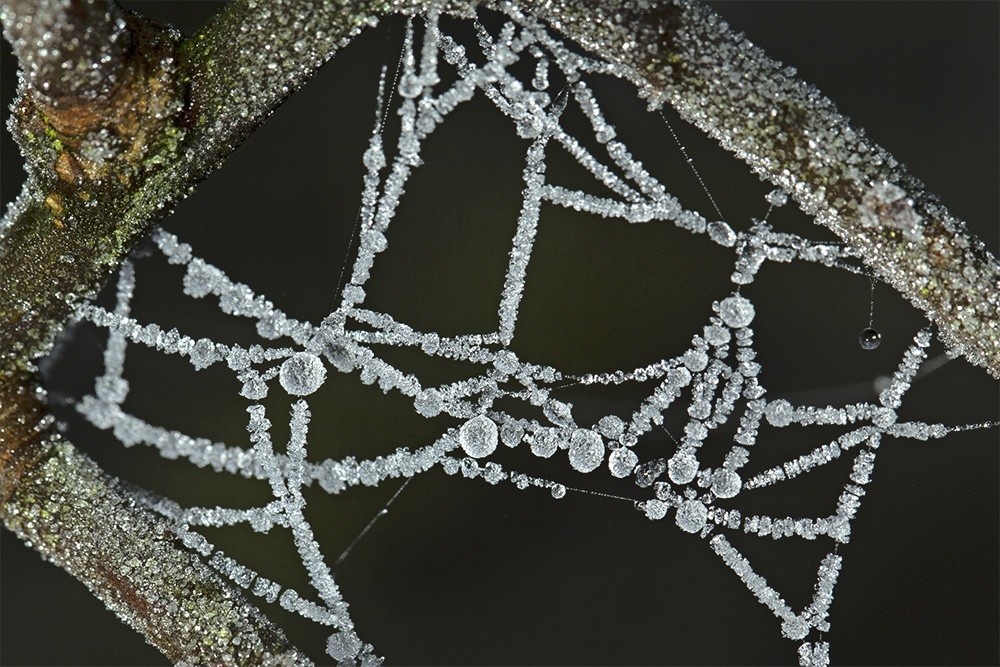 If ever there was a demonstration as to the strength of the humble Spider’s web, then this image goes some way toward proving one!

The winter of 2013/14 was shaping up to be one of those nondescript, damp affairs… Cloudy, dull skies and little sign of Winter. Then in late January, frosts started to descend and late one evening, before the frosts arrived, there was a heavy mist. In the small hours the temperature fell and all around was turned into a crystal world.

In the shot you see, small branches of a hawthorn had the dew frozen to its surface and to a spider’s web. Its remarkable strength is made clear and illuminated by flash, the frozen drops of water sparkled like diamonds.

A still morning on Martlesham Creek.

I was asked if I had some shots of Martlesham Creek in my collection of Suffolk landscapes…. Well, at the time, “no” was the answer. So, never needing too much persuasion to visit a place yet to be seen, I went along to check it out.

The weather was overcast and cold but the place was LOADED with atmosphere. On this day, the air was so still and wreaths of mist were appearing and and then disappearing.. wonderful stuff.

March 2014 The Making of Harry Potter 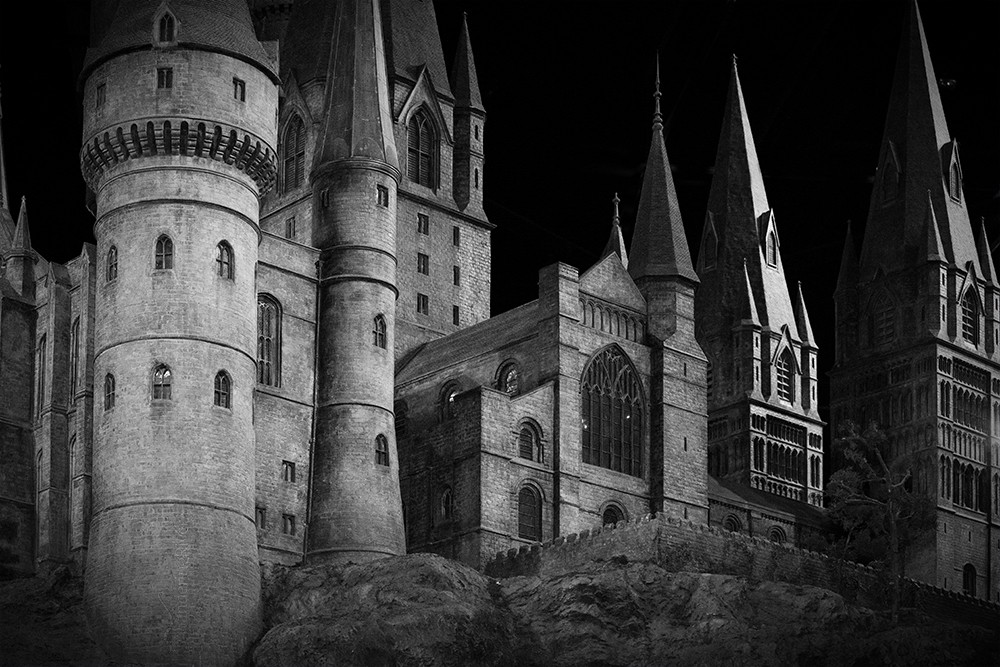 The set for the Harry Potter films has to be seen to believed. The sheer skill and artistry is, at times, too much to hoist in.

This is the month of my birth. Guess where I was taken out for the day?

What a place. What a day! I can’t help but wonder if J.K Rowling has to pinch herself at times when considering the huge world that has been built around the product of her imagination. I hope so..

The scale of the work is awe inspiring. The attention to detail. A day here is not long enough so if you have yet to go, book a time in the mid morning to give you plenty of time..

The Castle was one of many, many highlights. It is a 1/24th scale, if I recall and so very detailed.

Who says concrete can’t be beautiful? This breakwater, a wee step from the pier at Felixstowe, is more than just a defence against the sea….

I am indebted to a fellow photographer for being able to to present my own ‘version’ of this. Such structures serve a single and simple purpose and are often made from shaped concrete blocks with little that is pleasing to the eye. These, however ‘break the mould’. I do not think I have ever seen a coastal defence structure that looked so elegant. The curve is so graceful and the way it appears to disappear into infinity. Also, the mood of the structure changes with the tide and how restless the sea is.

There is a dream-like quality to this… but only because the way the sea was washing over the pillars presented that sense to me. In a simple shot, this would not be apparent. So this was a 30 second exposure – time for waves to wash over each other while the shutter was open.

May 2014 The Abbey Gardens in Bury St. Edmunds. 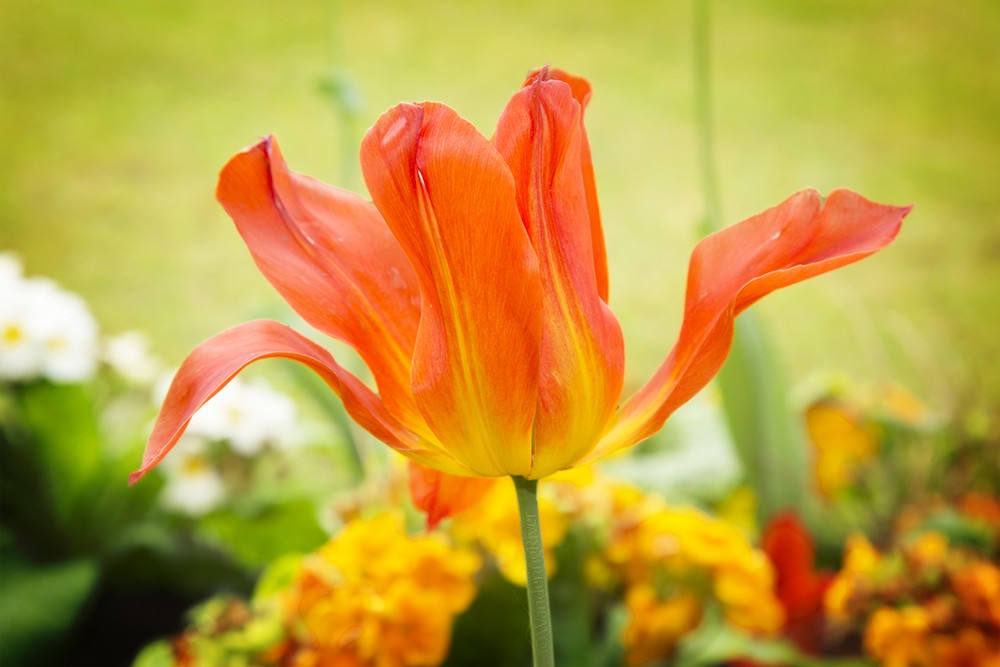 As they do every year, the gardeners for the Abbey at Bury St. Edmunds pull another ‘rabbit’ out of the hat… The Gardens are always glorious.

It was a dull ol’ day when I was here but looking at the blaze of colour these Tulips offered, it did not matter how dull it was. In my very limited knowledge of such things, I knew I had never seen such vibrancy. As much as I like a sunny day, it no longer seemed quite so important to get one after seeing this.

June 2014 All Creatures Great and Small.

“As large as life” is an old saying… 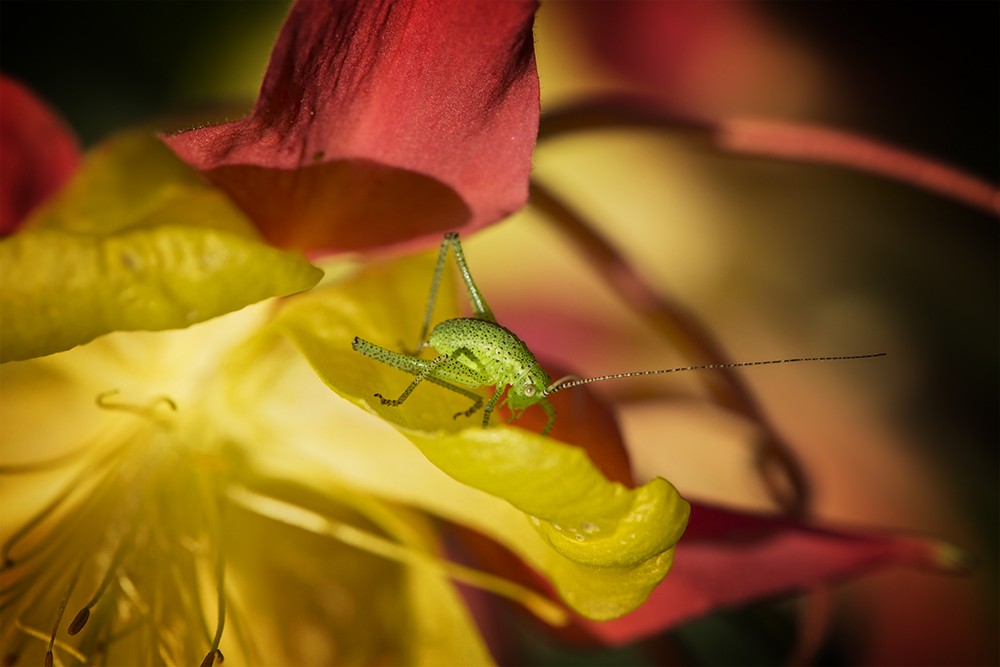 A Cricket resting on the petals of an Aquilegia

I was about to set out for an evening walk. I managed to get no further than the path that leads from the front garden to the road when I saw this wee fellow basking in the last of the day’s sunshine. It was still of much of the time – then, very slowly, it would stretch one of its limbs and return to stillness..

The Guildhall in Lavenham 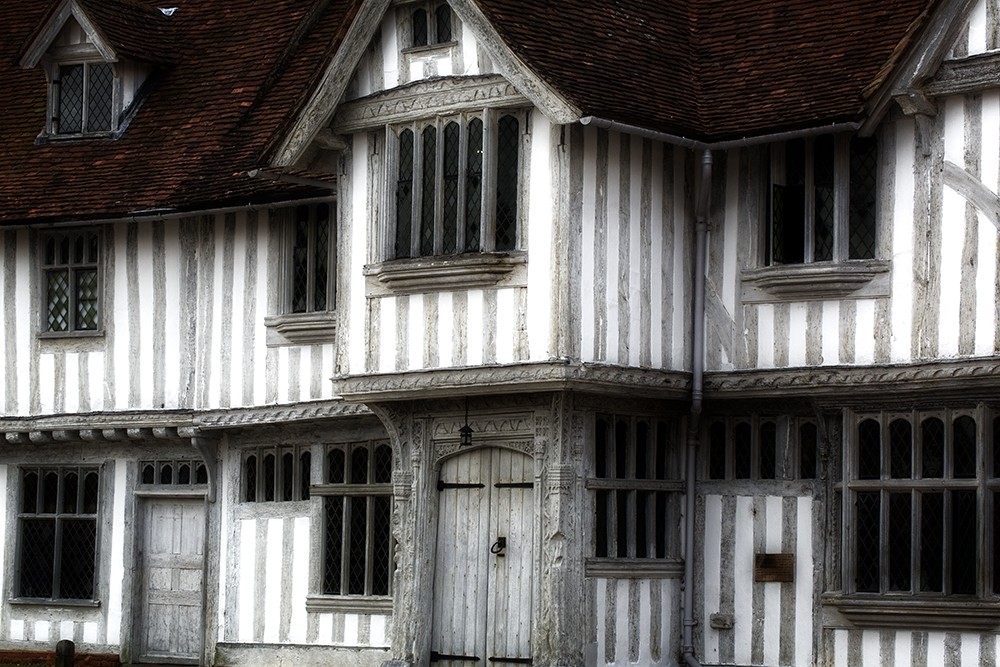 The Guildhall in Lavenham – built around 1530…

We thought a day out to Lavenham was in order… It was sunny at home – a beautiful morning but by the time we had travelled the few miles to Lavenham, the sun had been lost behind cloud and the temperature became almost autumnal. Regardless, the light made the old Guildhall an interesting subject and once again, using B&W to portray the venerable old building has not, I hope, done it a disservice..

The carvings alone are noteworthy but the scale of the building shows the wealth that was about this town when wool was still king.

The Guildhall has a very chequered history… The Hall was built by the Guild of Corpus Christi, a religious organisation of local merchants. The main focus however, was on religion and charitable works. Donations were made by the wealthy though not always to help the less fortunate. As was often found in the middle ages, some bequests lined the pockets of the clergy for favourable reverences in the form of prayer. The clergy was always open to donors in the best possible light when face with the pearly gates…. for a fee 🙂

Economic turbulence was also to add more colour to the history of the Guildhall. With many fortunes dependant on wool, the collapse of the cloth trade in the early 16th century was to add to the woes of the building.

Between the 16th century and contemporary times, the Hall has been home to a council, a prison wool-store and workhouse. In the early 1950’s the National Trust took ownership. 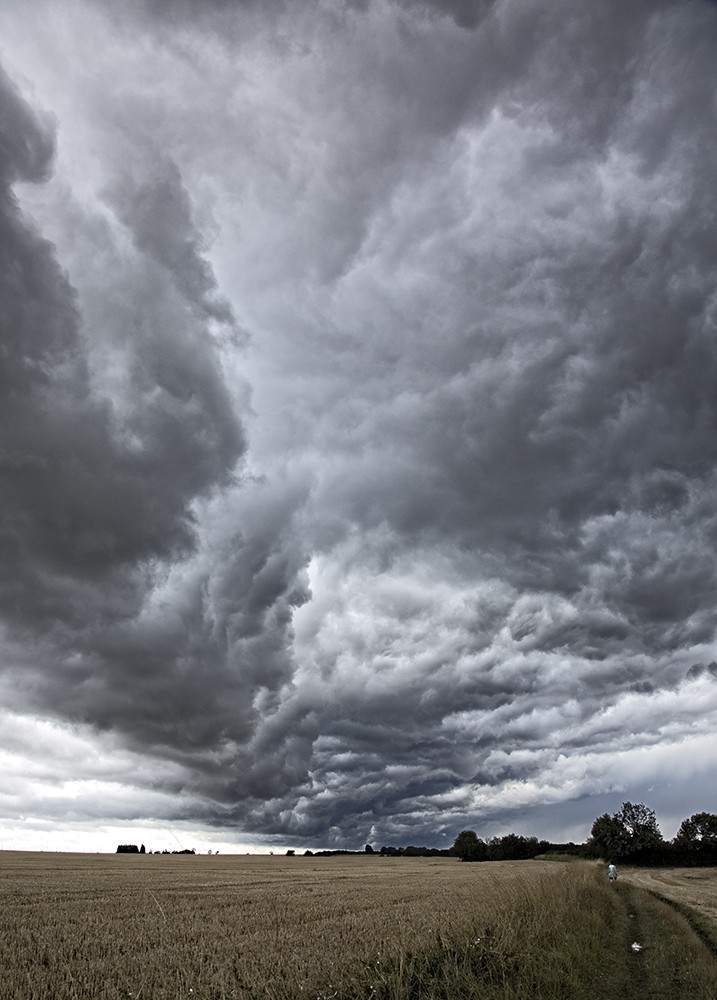 A heart-stopping sky over Suffolk…

August 2013 was to herald a series of unreal skies. The same, it would seem was to be so for August 2014. For a period of a few days, you could be forgiven for believing “the end is nigh” when looking at the sky. Torrential downpours were forecast – serious enough to warrant amber warnings from the Met Office and from this high point in the county of Suffolk, we could see the squally rains pass us by.

To walk under these heavens was a time to remember. 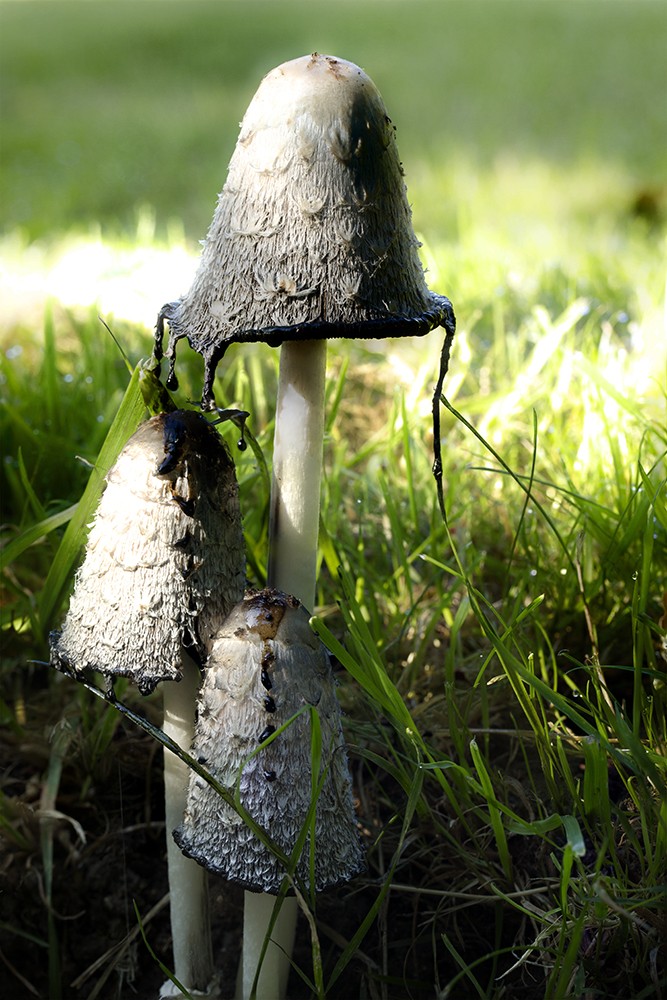 September brings the hint of Autumn and with that season, Mushrooms! This specimen is the ‘Shaggy Inkcap’ and lies on a well trodden path that is our “round the block” walk. It passes through the graveyard of the village church and passes by the wonderfully named “World’s End Lane”. Considering how flat East Anglia is, this part of Suffolk has ups and down that almost qualify as hills…

Almost.. but not quite.

A sandy beach on the northern shores of Lindisfarne..

There are a number of photographs that would fit in the space for October… and many would show a sunny day. So why this one? The answer lies in the pristine beach and vast skies that are a feature of Lindisfarne. The tide was on its way out when we arrived and this, combined with the fact it had rained heavily the previous evening, had wiped away any footprints that may have been set down the previous day. The rain had left a dipped texture to the sand making it even more alluring.

Then, there is this little branch. Almost like a skeletal hand. 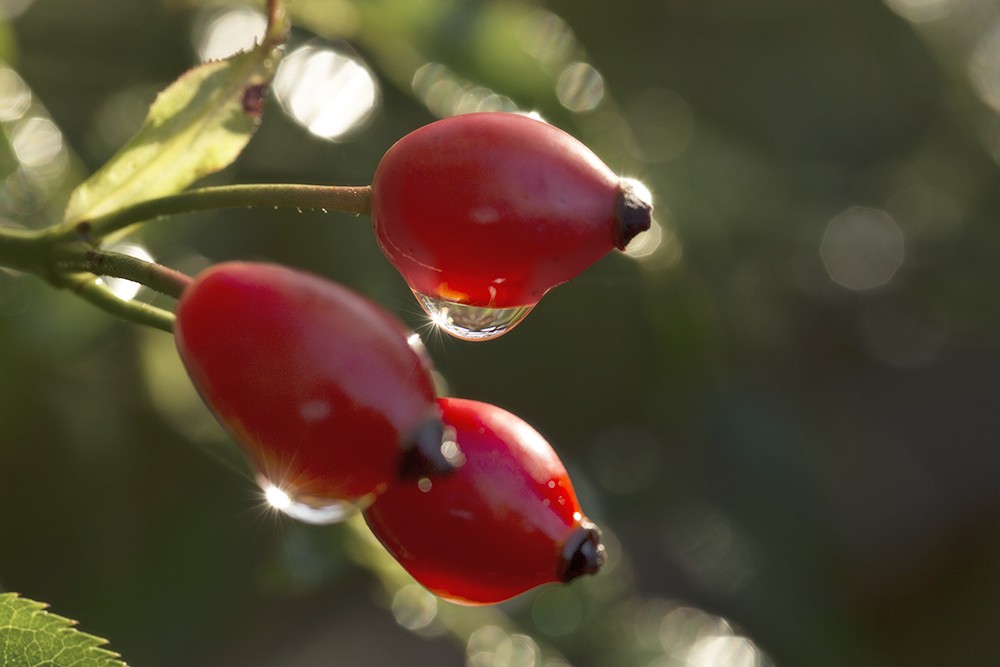 The Autumn sun sparkles through rain drops that had collected on rosehips..

At another point in the “around the block” route, a sparkle of light caught my eye. Move a fraction this way or that and the mote of light disappears. Finding it again, I managed to snag this shot… Luck was with me on this day. The sun was shining through a gap in the trees and no more than 10 minutes earlier or later, these rosehips would be in shadow.

This is the road that connects our village to the world…. but not for this day.

Rarely do have a winter we can actually call a winter. Many days, often dull, neither warm or cold. Sometimes though, temperatures take a tumble and the skies take on a scene W.M Turner would have recognised.

Snow and ice in our neck of the woods makes getting about tricky. Since snow and ice are rare, it is the reason us Brits just ain’t geared up for it. That said, we seemed to be taken by surprised whenever it does snow 🙂

On a day like this, I am raring to get outside. The fact the temperature may be well below the line makes the desire to get out even stronger. It was the case on this day. During the night, there was wind enough to blow snow across the road that passes between my village and our neighbours. By the time I was up and about the wind had settled to the merest of zephyrs. The clouds in the sky were like a freeze-frame.. for a long while, it seemed, they hardly moved.

All was silent. Just me out and about.