The Hidden Power in a Picture

For a photographer, understanding what it is about an image, the ‘rhyme and reason’ if you like, that cuts through the noise of our daily lives and seriously connects, is akin to a Holy Grail. I suppose some would regard that metaphor was bordering on heresy but I am not sure.. They are both about the spirit and how something beats in time with your soul..

Music has the power to do this.. as does the written word.

I posted an image of Gypsy Lane on my Facebook page recently and the reaction to it staggered me. Within a couple of hours of uploading it, hundreds of folk, most of whom I have never ‘connected’ with on Facebook, had seen it. Some had posted heart-warming comments and thoughts about it. Twenty-four hours on, the number continues to grow…

So, I wonder what it is about it that touched so many? To give the photograph some context, Gypsy Lane is a green lane, one we have walked many, many time times in the years we lived in these parts. As we reached the spot where the photograph was taken, the scene was arresting… The canopy of trees over heads cut out much of the sky and the hour of the day had brought the sun close to the horizon so there was a deepening gloom where the canopy was at its thickest. Ahead of us however, the trees gave way to an open sky. The setting sun was illuminating the tall hedgerow that bordered the right hand side of of the path. 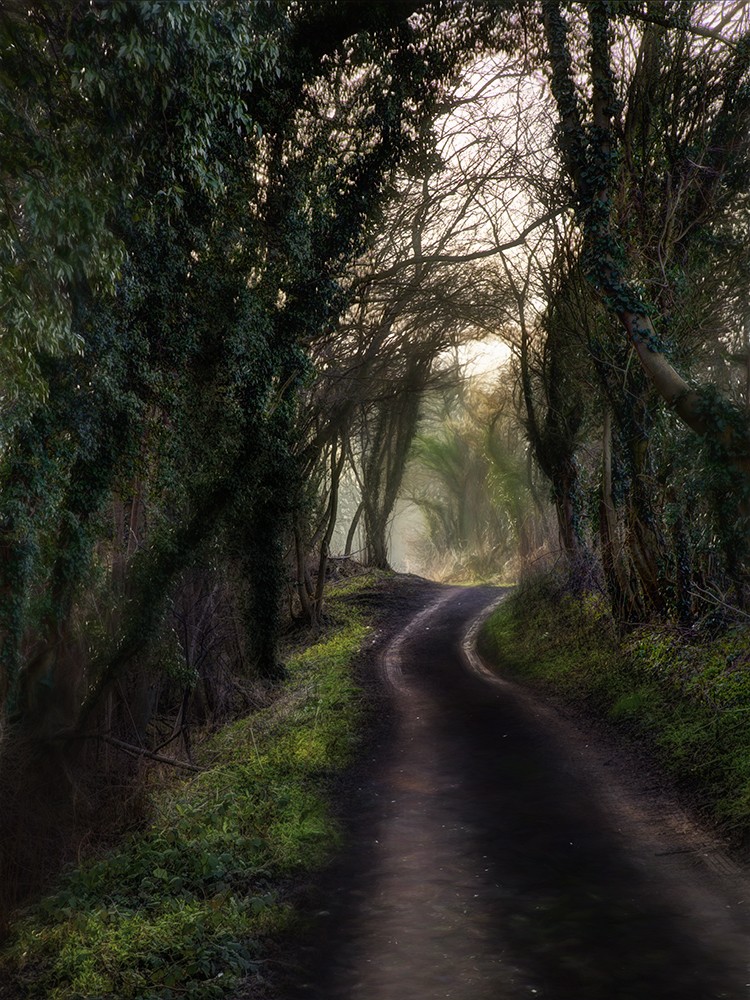 A green Lane in Suffolk. A place of quiet and stillness – perfect for winding down.

There literally was “light at the end of the tunnel”.

Was this the reason it has been seen by so many? If so, I find it a comfort.. After all, if we find ourselves in a time where solace is needed, then finding it in something as natural as a scene as this means we all have hope when things get a little rough. Of course, there may be many reasons! As many reasons as there are folk that viewed it 🙂

As arresting as this scene was, it was no more so than many, many other scenes I have photographed. They too, held me fixed to the spot for a while.. So, the question is – what was it about this one?

A romantic I may be but I am also a realist!! The popularity of this could also be down to pure chance – enough kindly folk were looking at the right place at the right time to see it. A much colder explanation I know, so no surprises if I prefer the explanation lies in other possibilities 🙂

By Steve Stoddart / No Comments
Manage Cookie Consent
To provide the best experiences, we use technologies like cookies to store and/or access device information. Consenting to these technologies will allow us to process data such as browsing behaviour or unique IDs on this site. Not consenting or withdrawing consent, may adversely affect certain features and functions.
Manage options Manage services Manage vendors Read more about these purposes
View preferences
{title} {title} {title}