The Hall is sited in the midst of timeless grounds, close by the Suffolk town of Long Melford. “Timeless”? A quizzical eyebrow may be raised at such language but Kentwell Hall is not like other of our old manor houses where much is done to preserve them in aspic.

On this visit, my time was restricted to the grounds. I was sure many hidden gem would have been waiting for me if I had more time! Still, I am content with what I have seen – the walled garden on the northern aspect of the house. A long established deciduous woodland borders the garden so the path I found myself following was lit by a green gloom – this enhanced the sense of mystery further. 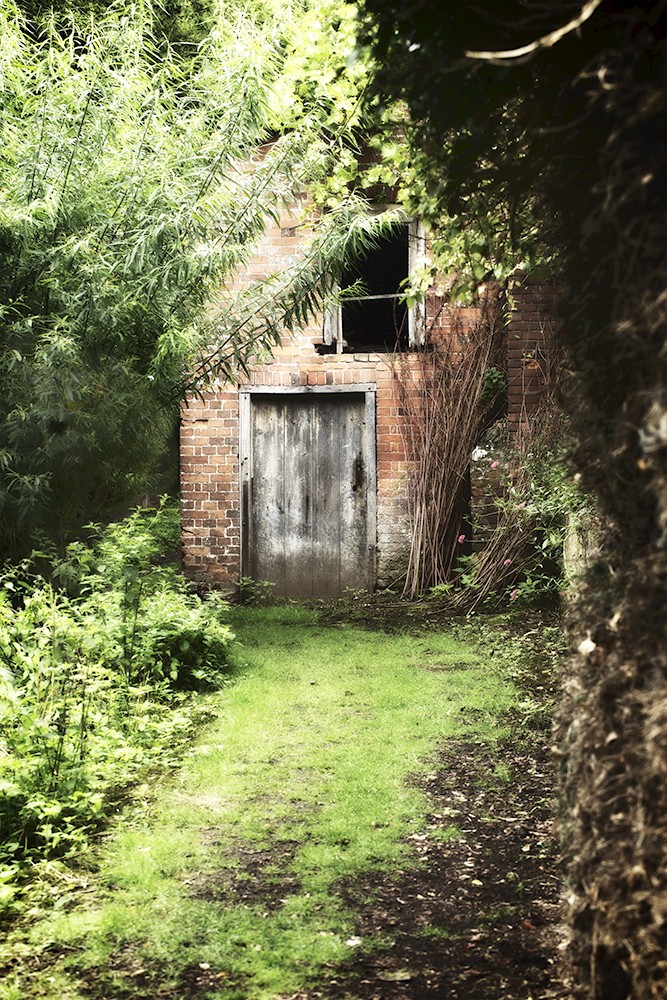 The old and abandoned boiler house for an equally abandoned Greenhouse at Kentwell Hall.

A long wall is to my right. Soon, a corner is turned and a derelict building canbe seen that adjoins the wall. There is a door – but it is barred shut.. There is a glassless window above it that gives a tantalising view of the long forgotten interior.. Oh, how I would love to be able to explore!

The building is long but narrow and soon, a flu can be seen – so a fire once burned here… A thought occurs. Many such places had grapevines growing under glass. I wondered if this was a boiler house to generate steam?

Within a few steps of entering the walled-garden, it was evident there had indeed, been glasshouses built into the wall. There were three.. all to a greater or lesser degree, in ruins. The one closest to the door had only the brickwork surviving and a curious structure it was. It appeared these used to be a greenhouse within a greenhouse. Huge steam pipes ran the length of the ruin.. so perhaps the building attached to the wall was a boiler house.. 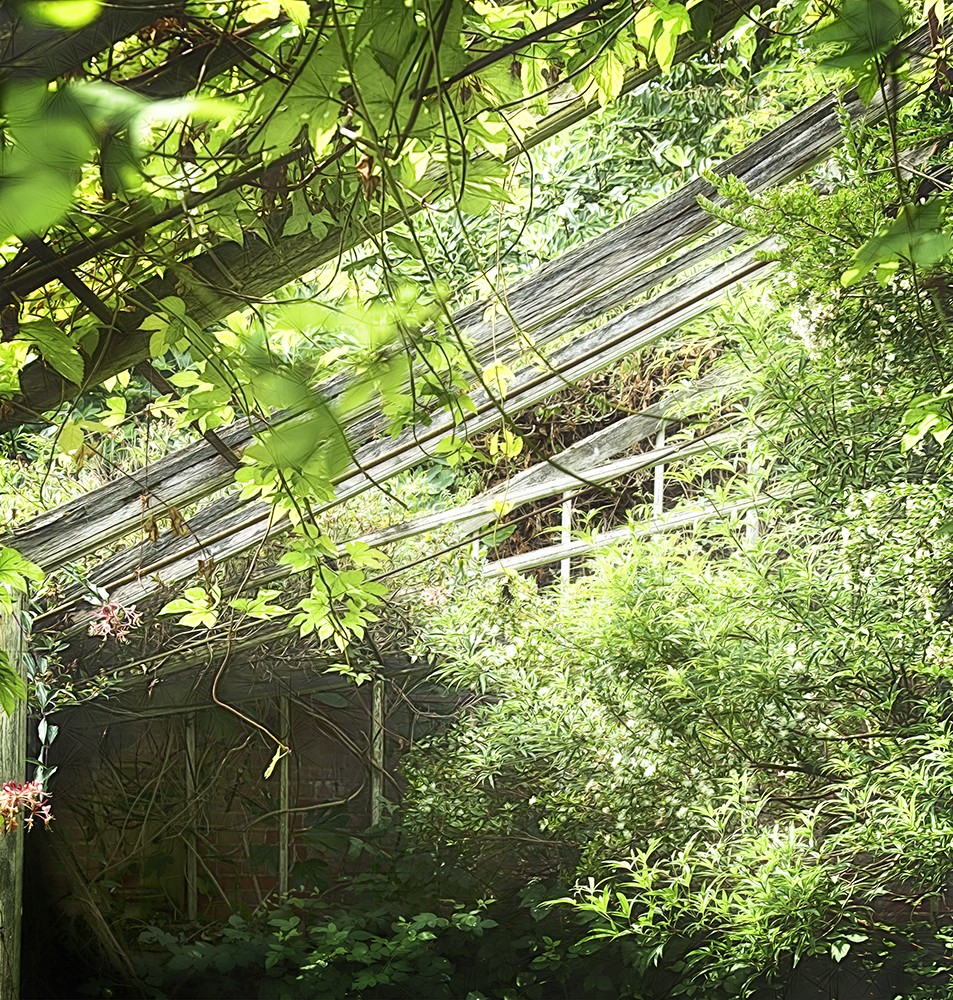 An abandoned greenhouse at Kentwell Hall

The remaining pair had, not only some of the timber structure still standing, but also a magnificent and all but wild vine. It had long forgotten the touch of human hand and had grown well beyond the boundary of the glasshouse that once contained it. Gnarled and twisted it may be but it looked as though it was still vigorous enough to produce grapes.

In its day, these glasshouses must have been remarkable. The remains of Victorian engineering was seen everywhere – a handle that used to open roof-vents.. 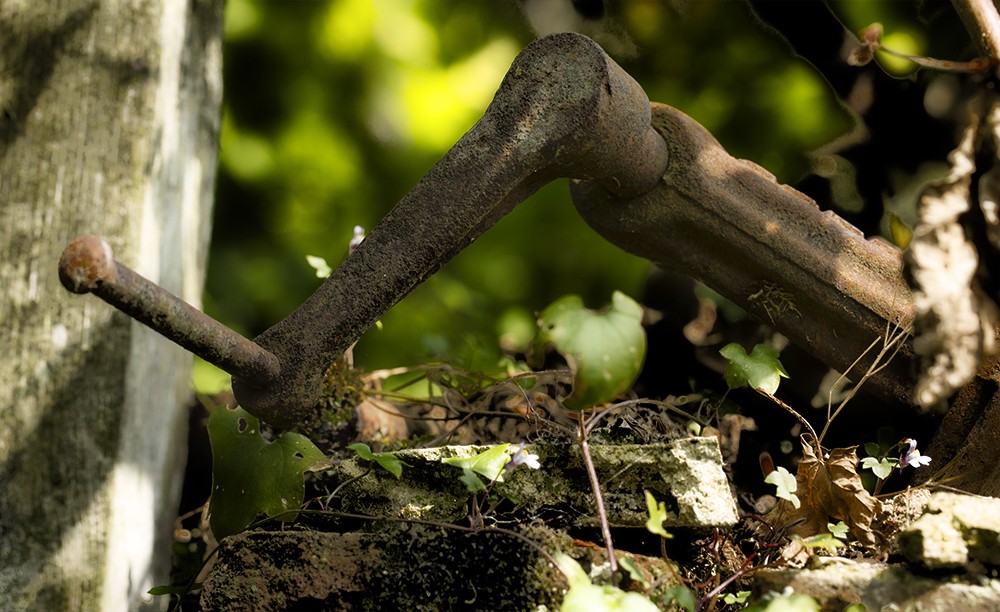 An old iron crank that, long years ago, had been used open vents in a greenhouse roof…

..to the cast-iron structure that formed the roof of the ‘inner’ glasshouse. No expense was spared it would seem, in constructing the vinery. 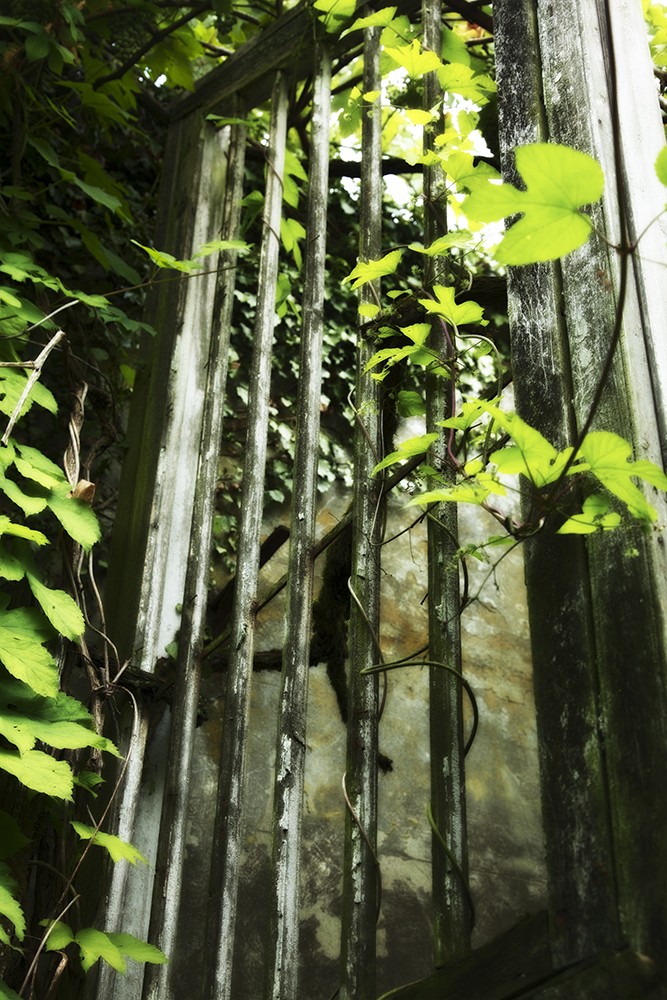 Only the timber frame remains of this end wall of the Greenhouse.

There was one section of the original wood frame that remained relatively free of the vine. It towered over my head though what was keeping it in place, I don’t know – it just seemed to hang there.

How wonderful it would be to see it restored but part of me feels to do so would in itself represent a loss. Seeing these remains made me stop and wonder about the past and the intervening years. Would that still happen if, on returning someday, these glasshouses were restored?

Kentwell Hall… If you have not visited, then it is well worth the trip. If you would like to know more, click here.